There has long been a link between music and resistance in Palestine –  with hip hop playing a major role in recent years – but there has never been a band quite like 47SOUL.  Originally formed in Jordan, and with members now scattered between Palestine, London and the USA, they have pioneered a unique style that they call Shamstep, in which hip hop and electronica are fused with Middle Eastern-influenced melodies and styles, including shaabi, the pop music of the Levant and dabke traditional dance music.  Semitics, their third release (and second full album) mixes stomping, no compromise dance music with powerful new songs and challenging, thoughtful lyrics in both Arabic and English. As Tareq Abu-Kwaik explains “it shows what each one of us regards as Shamstep music”.

47SOUL have toured the world since releasing Balfron Promise two years ago, and in the process have slimmed down to become a trio – the band now consists of Tareq, Ramzy Suleiman and Walaa Sbait –  and built up an impressive following across the Middle East and the global Arab diaspora. “When we play in Michigan in the USA it’s like playing in Palestine”, said Tareq “but then we also play shows where there are no Arabs at all”. In the process, the band have become more daring, both in the music and the lyrics. 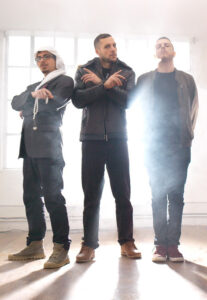 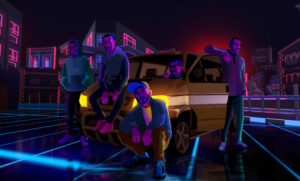