From the first time A-Wa took the stage, they’ve been dropping jaws, raising eyebrows, making people dance: from hipsters to families, from festivals to clubs, young and old, Polish, French, Israeli, and all over.

They became an integral part of the stage composition of Balkan Beat Box’s MINIMAL tour. Later on they appeared with a band of their own and gave shows around Israel and in music festivals in Poland and France in front of an embracing audience, while at the same time working at the studio with producer Tomer Yosef.

A-WA sends a refreshing and authentic breeze of world music to the music scene in Israel and abroad. A happy, warm and genuine music, that starting this year is going to break language barriers and boundaries and bring a new message for those who love the genre and in general. 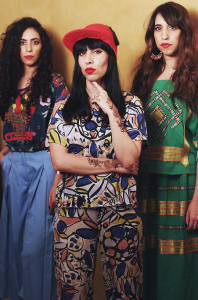