The champeta party machine from Colombia

The Bazurto All Stars was born in 2009 in the heart of Cartagena, Colombia in the Bazurto Market, amid the myriad colors, sounds and smells of that epicenter of Caribbean and African culture. They are known as the “pure party machine”, and the best Champeta band in Colombia whose 7 musicians put on an unrivaled stage show. Their concerts hook the audience from the first note with an explosive show full of contagious energy and dancing.

Their career took off in 2015 with the success of their hit “El Bololó,” a retake of the track “État major” by the Congolese group Extra Musica, followed directly by another hit, “La Pupileta,” chosen as the official music of the Barranquilla carnival in 2016.

It was also in 2016 that they won their first prestigious Congo de Oro award from the Barranquilla carnival, regarded as one of the world’s greatest. Immediately adopted by the carnival city, their track “Vacílatela con Fefi” was the carnival queen’s official theme in 2017.

They again won the Congo de Oro in 2018 and 2019, and they toured in Europe and the United States with soukous groups, in particular the Soukous All Stars and the legendary Zairian group Zaïko Langa Langa, with which they shared the stage in the famous New York club SOB’s in January 2019. They were even invited to Zaïko Langa Langa’s 50th anniversary festivities in Kinshasa. 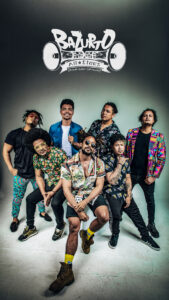