A life spent on the road has provided endless inspiration for Jori Collignon. But after 15 years criss-crossing the globe with former bands SKIP&DIE, Nobody Beats The Drum, and C-Mon & Kypski, the Dutch producer has settled into a house in Palmela, Portugal, complete with guesthouse, garden, and studio, and turned it into a place of inspiration, activity and creativity where many artists pass through, leaving their stories and ideas.

And it’s here that Collignon has deepened and expanded his sound, pouring his extensive musical and travel experiences into the eight rich, diverse, and colourful tracks that form his debut album as a solo artist. A natural blend of acoustic and electronic instruments that balance traditional and futuristic themes, the record is influenced by Latin American, African and Arabic music. “I continue to travel through music,” says Collignon of the sultry rhythms and spiritual universality deployed throughout, and his inspiration is truly global. A pioneering electronic musician, each track positively shimmers with originality and vitality, as he creatively combines motifs and styles in new and interesting ways.

Purposefully shunning lyrics and singing, Collignon wanted the music – and the moods he creates – to speak for themselves. “There are so many voices everywhere, so much talk,” he explains. “For now, what I want to say is best expressed just by sound and instruments.”

Such a dynamic approach extends to his new live show, a loud and loose affair using driven up guitar-amps and live improvisation to push sound and composition to new levels. Accompanied by multi-instrumentalist Gino Bombrini (SKIP&DIE), their performances are engaging and passionate. Collignon might have found a home, but his music continues to take flight. 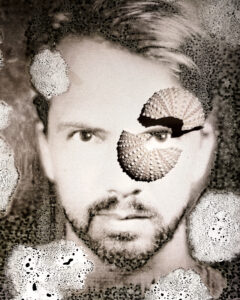