De Kift is a poetic multi-headed fanfare-punk band from The Netherlands. Full of unbridled energy, intimacy, melancholy and euphoria. And all that topped with a good dose of controlled chaos, both on record and on stage. A magniﬁcent mishmash of magnetizing music. With Dutch song lyrics that consist of playful fragments of world literature.

Since its inception in 1988, De Kift has released ten studio albums, collaborated in several theater-, ﬁlm- and other multimedia-projects, written music for ﬁlm and televison, and toured with their shows extensively all over the Netherlands and abroad. 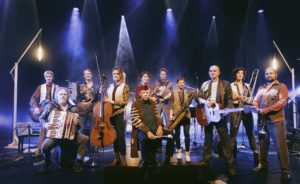