DeWolff are not a band to sit still. They thrive on constant motion. From psychedelic southern rock warriors to emissaries of soul, they weave in amongst the rich tapestry of sound and often find their way to the heartbeat of a song by spending a little time with it. Sat on its front porch, soaking up the surroundings until it’s time to open the door and step in.

Formed in the Netherlands’ Deep South of Geleen as teenagers, they have carved out a place for themselves as free-wheeling adventurers. Prolific in the studio and well-worn road-rovers, they’ve grabbed the last few years by the scruff of the neck and not rested.

In the last four years, they’ve released five albums – Thrust (2018) reached #6 on the Dutch album charts, Live & Outta Sight II (2019), Tascam Tapes (2020) hit the #7 spot, Live at the Royal Theatre Carré, Amsterdam (2021) and Wolffpack (2021), which reached #2 in the Dutch album charts – their highest charting album to date, only missing out to Foo Fighters for the #1 spot. “That’s crazy when you come to think of it,” singer/guitarist Pablo Van de Poel says. “Wolffpack was an experiment almost. It felt like we made that record because we had time to kill.”

Before the world of live music opened up again, they performed a series of unique live stream shows for each of their nine studio albums over nine nights at the Tivoli in Utrecht. Then, as crowds slowly came back into venues, they played four shows over two days with the Metropol Orkest at the Royal Theatre Carré in Amsterdam. They hopped on an eight-date European tour with the mighty TOTO in the middle of their own mammoth headline tour. They performed the soundtrack of the 2022 Winter Olympics on TV, and their song “Sugar Moon” was chosen to appear on an Armani Code TV commercial featuring Ryan Reynolds.

And now, as they prepare to take on a “childhood dream” tour with The Black Crowes through Europe, they’ve announced that new album Love, Death & In Between will be released on 3rd February 2023, once again via Mascot Records / Mascot Label Group.

They refuse to put restrictions on themselves and are overflowing with ideas. Previously they’ve released albums that all charted high in their homeland; their debut EP DeWolff (2008) was followed by the full album Strange Fruits and Undiscovered Planets (2009), which announced them to the broader stage. The psychedelic Orchards/Lupine (2011) came #11 in the charts, the rock opera of DeWolff IV (2012) hit #18, and on Grand Southern Electric (2014), they embraced the sounds of US Southern Rock, hitting #6. On Roux-Ga-Roux (2016), they combined all these influences, reaching #7.

The ambition to push themselves remains. Love, Death & In Between is a reaction to their previous two studio albums. Tascam Tapes was recorded on the road with a four-track cassette recorder from the 1980s. You can watch the documentary on it here. Whilst Wolffpack was recorded with social distance measures in place in their Utrecht, Electrosaurus Southern Sound studio.

“I love the controlled environment of the studio,” Pablo says. “But normally we spend a month or couple of weeks in the studio, then we go on the road, and that’s chaos. It’s crazy stuff, improvisation, people reacting to your music, and you’re reacting to them. That’s what we’ve missed. We longed for it so badly at the end of the Corona time. That’s how the idea started for this new record. We wanted to do something with people, as many people as possible.”

In May 2022, they drove ten hours to Kerwax, an analogue studio in the village of Loguivy-Plougras in Brittany. “We thought, let’s go on an adventure,” he says. Located in North-western France and surrounded by forests, they retreated to the stunning residential studio engulfed in vintage recording equipment from the 1940s to the 1970s.

“It was so far outside our comfort zone, which previously was recording at our studio and calling someone at noon, asking, ‘can you be here at two, oh and bring your instrument.’ We had to plan everything beforehand because it was a ten or eleven-hour trip to Kerwax.”

Everything was recorded fully analogue and directly to tape, no computers were used in the making of the album. The tapes were then sent to a mastering engineer who cut it straight to a lacquer that was used for the vinyl pressing – even this mastering and cutting was done fully analogue.

“Normally, I play all the guitar and the bass parts, so I get to control them. We brought all these extra people, and we wanted their signature on it. Playing with ten people in one room is always chaotic, and the reality is that with every take you do, somebody is not satisfied with how they play. But it also makes you realise what is important about a take.” It was all recorded live to tape, with no overdubs.

Before hitting the studio, the ideas for the new album had started to slowly simmer away. The themes were partly inspired by novels from 20th-century American authors that Pablo had been reading during the pandemic. Particularly John Steinbeck’s ‘Tortilla Flat. “There is a quote from him, ‘The good story lay in half-told things which must be filled in out of the hearer’s own experience,’ and that was something I really wanted to do with lyrics on this record.”

The Paul Thomas Anderson movie ‘Licorice Pizza’ was another chess piece in the album’s make-up. “That inspired me so much. Some things happen in it which are so random, and you can’t really explain where they come from or how it fits in the story. That’s what I wanted to do with the lyrics as well. To write stuff that is multi-interpretable to people.”

The pieces started to line-up, bit by bit, and during this time, the band were deep diving into old soul and R&B records – Sam Cooke, The Impressions, The Coasters, The Clovers, Ray Charles and Little Richard as well as a heavy dose of gospel – The Soul Stirrers, Al Green and early records by The Staple Singers.

But the lightning strike moment for Love, Death & In Between came via Memphis. “In 2019, I attended a sermon by Al Green at his own church, and it was a life-changing experience, musically,” Pablo remembers.

“I was in there for literally one minute, and I was crying. I spent the whole sermon crying because it was so beautiful. He would be talking about someone who can’t pay their bills, and he would say, ‘I call up to the almighty saviour to help her, and it was met with a round of ‘Yeaaah! Yeaaah’s!’ and the band would just play two chords, and it was so beautiful. I was intensely touched by it. It left a profound impact on me. I really wanted to do something like that at a live show, but we didn’t have any songs that it’d fit into. So, when we started writing new songs, I was like, yes, let’s do something like that. A very simple chord progression, but give it that, almost religious experience. Because, after all, music does feel like a religion to us. It’s something that’s in our minds all the time. It’s what we dedicate our whole lives to.”

Some songs on the album wear their heart on their sleeves, such as “Counterfeit Love,” whereas the 16-minute epic “Rosita” shows their progression. “How I want to write now is more reflected in songs like this,” he says. “I wanted those lyrics to feel like a story, but also a journey, within itself,” he explains. What starts as a small story of high school love explodes into a tale of the goddess of love and death, which links into “The Queen of Space and Time”. “It’s the same person. It is about this god-like female figure that controls all kinds of crazy dark stuff. Also, with Rosita, the only way to be with her is to be asleep or dead, so it’s a combination of love and death. That’s where the album name comes from.”

“I wrote ‘Queen of Space and Time’ in a dream,” he laughs. “I dreamt I was sitting around a campfire; it was super cheesy with a couple of friends. I had an acoustic guitar, and I was playing F, G, C, D and singing a melody and the next morning, I woke up and thought, that’s a cool melody. Those chords didn’t match what I heard in my dream, but I spent some time with it, which became the song’s main melody.”

“Heart Stopping Kinda Show” is another multi-interpretable song, “It’s how I see life,” he says. “Life is the heart-stopping kinda show. I was writing with ‘Tortilla Flat’ in mind. These characters are not constantly overthinking things; they live, drink wine, and have these beautiful moments. They are doing the ultimate living. In the song, I wanted to describe the things in life that are beautiful.”

“Will o’ the Wisp” has a seductive darkness to it, whilst songs like “Night Train,” “Message for my Baby”, and “Wontcha Wontcha” are joyous roof-raisers.

They have supported The Black Keys, Blues Pills, Deep Purple, TOTO, The Black Crowes and count Seasick Steve as a fan. “Seasick Steve was asleep in his bus at a festival we were playing. Right after we came off stage, he told us, ‘that was amazing, guys.’ He was dreaming that he was watching The Allman Brothers live in ’72 and woke up realising he wasn’t in a dream; he was hearing us. He said, ‘I thought I heard The Allman Brothers playing in my dream, but it was you.'” They later crossed paths with him, where he introduced the band to their idol Robert Plant.

Out of the rural surroundings of Brittany, DeWolff left with twelve songs, over four tapes of in-the-moment recordings, with friends, having fun and remembering what is most important to them. On a diet of Al Green, Sam Cooke, and John Steinbeck, they’ve created some of their most soulful but rousing music. When they sing, “Hey there baby won’t you come on in, I got plenty old records that we can play, some rhythm & blues some old rock ‘n roll, yes the type of stuff that can save a soul”, you better get ready for that heart-stopping kinda show. 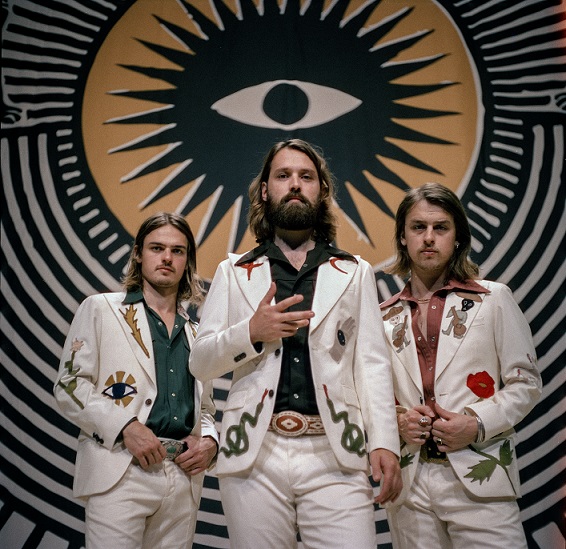