Jaw-dropping, genre-defying and not one who follows the rules

Benjamin Schandy, better known as Jimi Somewhere is not one who likes to follow the rules when it comes to music. Steady beats, poppy piano’s, a bit of obvious autotune here and there; the Norwegian Jimi cannot be put into a box. He has been releasing jaw-dropping, genre-defying music since his late teens. Whether he sings or raps, makes a hiphop- or indie popsong, one thing is for sure: Jimi is something else.

On his 18th birthday in 2016 Jimi uploaded this first EP Memoria on Soundcloud, which he wrote, recorded and produced himself together with best friend Milo Orchis at their school in Norway. Two years later the ball started to roll and he got invited to LA to make music which resulted in his second EP Ponyboy. His latest album Nothing Gold Can Stay – released via Ultra Records –  is a masterpiece for all sorts of moods. 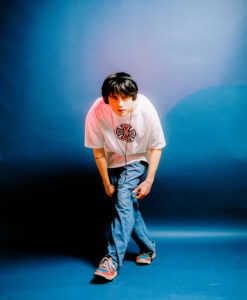