Touareg rock with a message

Kel Assouf means both “those with nostalgia” and “sons of eternity” in the Touareg language Tamasheq. The group came together around the exiled Touareg musician Anana Harouna in Brussels in 2006. From the beginning, Kel Assouf built its identity around two central ideas, the promotion of Touareg culture and the struggle against discrimination.

The aim of the album BLACK TENERE released on Glitterbeat Records on 15th of February 2019, was to create music in the studio that would sound like a live act, keeping an important space for improvisation and freedom. They wanted to keep ALL their music lines performed live on stage, oldschool style. The tight formula – with a keyboard player performing simultaneously as a bass (Korg) and organ player (Nord Electro) – allows spontaneous interactions between the three musicians. Audience feel that freedom and they love it, maybe because that’s what life is all about.

“The current Kel Assouf line-up is in effect a power trio in the Hendrix/Cream lineage, with Ben Youssef’s two synths working closely with Penu’s thunderous drumming to provide a hulking, thickly layered rhythm and bass support for Ag Haroun’s guitar.(…)“ – The Wire

“Kel Assouf mix the mesmeric desert blues of Tinariwen with the full-frontal assault of Led Zeppelin, Sabbath, or Queens of the Stone Age … Frontman, the charismatic, Flying V-toting guitarist Anana Ag Haroun, sings of the anger of the stateless Tuareg people over magnificently grungy guitars propelled by the power drumming of Oliver Penu.”  – The Times

“A power trio with rock guitar firmly in the spotlight … A varied, mature an inspired result.” **** – Mojo

“I enjoyed every moment, as it seemed did everyone around me, from rock n roll face melting guitar licks, to romantically plucked acoustic tracks – the music was of brilliant standard.” – Sophie Darling 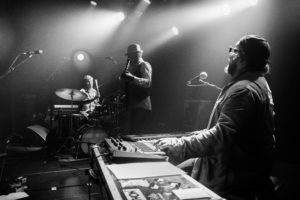 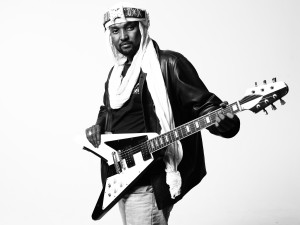 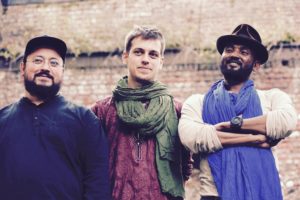