Marina Satti is a young singer and songwriter from Greek and Sudanese parents. Her first singles “Koupes”, “Nifada”, and “Mantissa”, counting millions of views on YouTube.  She presents her new multicultural music show, called YALLA!, which in Arabic language means “Let’s go!”. Supported by her team, she introduces us to a unique and alternative music spectacle, which is deeply influenced by Greek, Balkan, Arabic and Middle-Eastern sounds, incorporated into a more modern and urban music context. With racism and xenophobia being currently transformed into a conscious behaviour, which sometimes lead to provocative actions, Satti decided to declare her presence by creating a music show, which includes elements that construct her artistic identity and clearly show her social perceptions on equality, pride, and anti-racism.

YALLA! has an alternative, pop and urban mood and its ultimate goal is to eliminate social and geographical distances by creating various strong feelings and giving voice to everyone’s right for freedom. Different dance styles and movement qualities, stripped of the feeling of guilt coexist in the show, creating a harmonic framework, as well as highlighting the pluralistic approach of YALLA!. 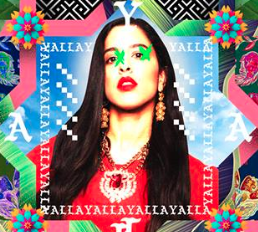