‘Future Latin’ he calls it, tracks drenched in energy and passion; the same energy he brings to his live shows, and the same passion he’s carried with him during his entire musical career.
Freed from the constraints of compromise or expectation, MAURINO – who rose to fame with both TenTemPiés and as founder of Fiesta Macumba –  has hit upon a thick, dynamic sound, swirling tropical bass, hip hop, Latin, and reggae into a seductive, swaggering brew.

The child of Chilean refugees who’d fled Augusto Pinochet’s brutal dictatorship, MAURINO was born and raised in liberal Amsterdam, an upbringing that married his Latin roots, his parents’ political activism, and the city’s liberal creative freedom. Such formative experiences shaped MAURINO indelibly, both an artist and someone determined to follow his own path.

I’m rediscovering myself”, says MAURINO of the new songs coming soon under his own name. “And it’s so powerful.” 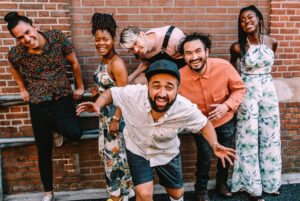 Down The Rabbit Hole
Ewijk NL