8 piece fiesta animal which will eat your crowd!

Muyayo Rif is from Cornellá de Llobregat (Barcelona). They started with mixing  punk, ska, reggae, latin and rock, in the best of the Barcelona mestizo tradition.   From  2007 they started to work with bass player/producer Gambeat (Manu Chao La Ventura,  Mano Negra) which helped to develop an incredible energetic live performance. The band has always been critically commenting daily live from a positive view without forgetting to make you dance.

Muyayo Rif proves to be impressive at their live performances, leaving no one without dancing.

After two years of silence… In 2022 they are realising their fifth album, “MEGALITHIC”. With this last album, the band from Cornellà has maintained its energy and groove, while redefining themselves with new sounds. Fans who won’t be disappointed: MUYAYO RIF’s heart and essence is beating stronger than ever. A renewed game, where MUYAYO RIF has decided to bet it all, and, once again, won’t leave anyone indifferent. 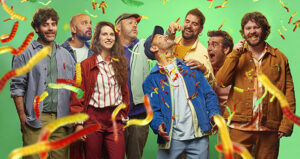