The Midnight Hour (US)

When two of hip-hop’s most accomplished composers get together to make synthesized orchestral soul and jazz you know the results are going to be special. Ali Shaheed Muhammed (of A Tribe Called Quest) & Adrian Younge initiated The Midnight Hour in 2013 only to put the project on ice to provide the score for the web television series Luke Cage. The duo’s long awaited self-titled 2018 debut album showcases their songwriting ability like never before. 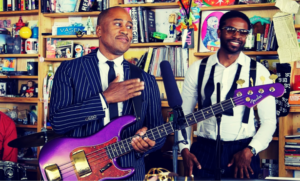