Yemi Eberechi Alade, born March 13, 1989, better known as Yemi Alade, is a Nigerian Afropop singer-songwriter. Her fame has taken a continental and international importance with her single Johnny. Since then Yemi has gained prominence in the music industry and is considered one of the biggest artists in Africa.

Yemi Alade was born on March 13, 1989, in Abia State, Nigeria. Her father James Alade is of Yoruba origin, her mother Helen Uzoma is of Igbo origin. She is the fifth of seven children. After a childhood in different places according to the assignments of her father, a police commissioner, her family settled in Lagos when she was a teenager. “I grew up listening to everything from Sunny Adé’s juju music to Whitney Houston,” she says. Shestudied there and pursued graduate studies in geography at the University of Lagos.

She made her musical debut at age 16 in a girl group called Noty Spices in 2005, but her music began to become really popular in Nigeria in September 2009 following her success on the reality show, Peak Talent Show. A few months later, she released her first single Fimisile on the Jus’ Kiddin label.

In 2012, she signed to the Effyzzie Music label and launched her single Ghen Ghen Love.

In July 2013, she released the video for a more romantic R&B song, “Bamboo,” produced by Fliptyce. But it was in the last quarter of 2013, that she broke records and gained international fame with her hit song Johnny, produced by Selebobo, leaked on the internet. The song became a hit in Tanzania, Kenya, Ghana, South Africa, Liberia, Uganda, Zimbabwe, and the UK, among others. It is listed as one of the best songs of 2013, despite its late release in the year and the lack of a music video.

She has been on the cover of several magazines and has played around the world, occasionally sharing the stage with Mary J. Blige, Becca, Shina Peters, Waje, etc. Through her self-mockery, her themes (love, disappointment in love, good food, etc.), she embodies the young African woman. She covers her main hits in different African languages, such as Swahili. She also covers some songs in French.

In 2014, she teamed up with cinematographer Clarence Peters and created a music video for Johnny, released in March, which garnered over 149 million views on YouTube. She is the first Afro-pop star to surpass 100 million views on YouTube. She released her first album, King of Queens, on October 2, 2014, and then went on tour. Her second studio album, entitled Mama Africa, was released in March 2016. Her career is truly launched.After performing live alongside Nigerian music heavyweights (Dipp, Ice Prince, Eldee, MI, Sauce Kid, Shank, Sir Shina Peters,Waje, Wizkid and Yemi Sax) Yemi Alade now stands alone at the top of the bill. In 2019, in addition to appearing on Beyonce’s single Don’t Jealous Me, she released her fourth studio album Woman of Steel containing collaborations with artists such as Rick Ross, Angelique Kidjo and Funke Akindele. 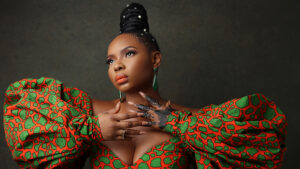