Brazilectro pioneers more than back on track!

Ever since their first smash release Outro Lado (1999) Zuco 103 is internationally known and loved for their original Brazilectro sound. The Zuco 103 sound has travelled the world, from Tokyo and Moscow to South America and back again, all around the indie hot spots of the European Cosmopolis. Etno Chic and their new live set packs a powerful punch of old skool electrosamba, warped funk and a dash of melancholy mood enhancement. To call this a comeback would be a huge understatement: the Zuco 103 sound never left the building. In between live acoustics and weird but oh so funky electro sounds, Zuco 103 remains centerstage – a force to be reckoned with. The Zuco 103 triumvirate holds no prisoners and remains the most effective Afro-Electrical-Rhytmic unit around, graced with the elegance and wit of Lilian Vieria’s présence. 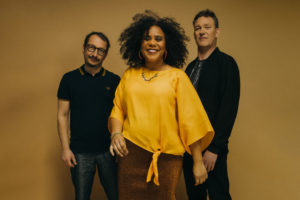