Jo Goes Hunting is the brainchild of Jimmi Jo Hueting. Besides his activities as a jazz drummer, he is blooming as an eccentric producer and songwriter. With the love for experimental electronic music, obscure hiphop and sixties pop in combination with his surgery style of production, he creates a sound that comes together in an innovative, flawless and versatile whole; every detail in his music has its own accurate character.
Strongly influenced by his studies as a jazz drummer, rhythmic diversity is the core of each song. Contrary to what you may expect of the complexity of those rhythmic elements, the music is very danceable, uplifting and catchy.

In his studio, Jimmi Jo Hueting plays and records almost all instruments himself, while live he is accompanied by a group of musicians who built up quite a live reputation; with full devotion and expertise.
Jo Goes Hunting performed in all the main clubs in The Netherlands and on festivals such as ‘Best Kept Secret’, ’Down The Rabbit Hole’ and ‘Iceland Airwaves’. Jo Goes Huntings debut album ‘Come, Future’ (2017) was well received by the press and obtained radio play all over Europe. 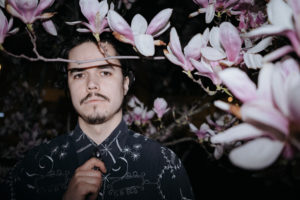